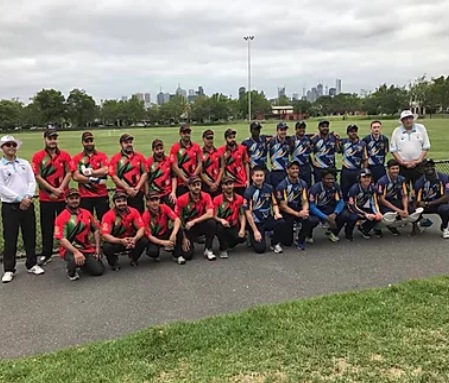 Thursday 26 January
Edinburgh Oval
A great initiative by having a 20/20 match between the Crusaders Rebels and a combination of Afghani players who were endearingly called the Afghanistan Cameleers. It was a real melting pot where the Crusaders had 10 nationalities represented in their team. Swan gave an education lesson to all present that the Afghanis brought the camels to Australia so he thought it to be apt to have their name the Cameleers. The Crusaders Rebels were led by Sol Mire and the Crusaders batted first .

Rizio and Walker started and they had a nice opening partnership of 47. Some good running between the wickets before Rizio was caught for 25 for 18 balls. included in his innings was a massive 6! Walker and Rosewarne continued to play well and Walker was retired for 27. Rosewarne looked like he was going to get on with it and he struck the ball flat and strong only to be brilliantly caught by the fielder at mid-on. Out for 9. Peiris came in and went for 2 after being caught in mid off. Croes the wicket keeper came in in over 10 and combined well with new batsman Sarve for 50 runs to get the score to 120. Sarve was retired by Swan on 23 from 13 balls at a strike rate of 177.

Paul Chin came in but unfortunately Croes was caught behind for 22. Chin and Captain Mire turned over the strike but they could not find the boundary. Mire hit two big shots and was luckily dropped on the boundary twice . Chin played some good shots at the leg side but was bowled with a good ball. Thukral came in but did not last long to be run out for 1. Mire and Nkala finished the innings off to get to 9/134.

The Afghanis started with their captain Noori and one of the Safi brothers. Mawien started the innings but bowled fast but with a few wides and the Afghanis used it to get off the mark. Rosewarne bowled and got Safi out for 10 , caught by Thukral in slips. In came 20/20 specialist I Laghmani. He made his intentions clear by hitting a two and then to be continuing to hit 4’s and 6’s all over the park. He was in devastating form! During his batting domination, Noori was caught by Hanif in first slip for 9 , Sadat caught behind by Croes for 4. At the end, Laghmani was caught in deep by Sarve off the bowling by Chin. A great hit by Laghmani 9 4’s and 2 6’s to make 54 of 22 balls. Qasimi made it 31 of 24 to make it appear that the Cameleers would make the total with ease but when he went out it was 7/123. Laghmani and Babak went out for 3 each and the Crusaders started to get on top – 9/123. Babak and Popal were however able to lead the Cameleers to a victory on the last ball where they were able to get to 135 and win by a wicket! A great day.

Overall main figures in the bowling:

• Rosewarne 3/22 (3)
• Chin 2/21 (2)
• Thukral 1/8 (2)
• Mire 1/11 (2)
• Sarve 1/15(3)
• Nkala 1/21 (2)
A great Australia Day supported by Edinburgh CC and having delegates from the Parliament, Cricket Australia, Cricket Victoria and supporters of Cricket in general all present. The shirts were sponsored by Shangri-La Constructions. Thanks to all the Crusader volunteers for a great day enjoyed by all finished off with a scrumptious Afghani feast. Swan is keen to repeat this successful day next year!